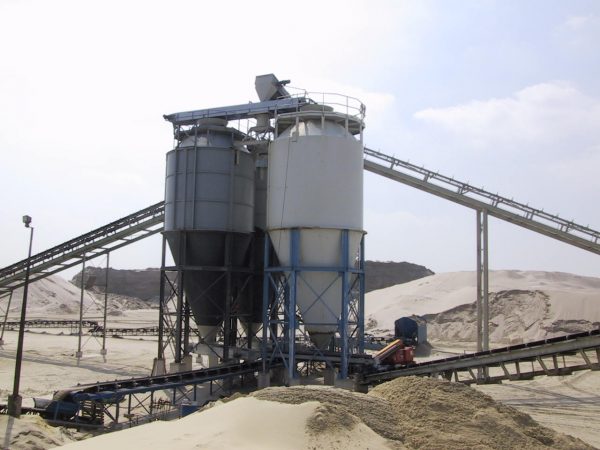 Concrete is the world’s most widely used manufactured material. With 14 billion cubic meters produced in 2020, the main uses are in the construction of buildings, homes, roads, bridges, tunnels, dams, and a host of other structures. It was underpinned by 4.2 billion tonnes of global cement production according to the Global Cement and Concrete Association. Future growth in demand for cement trade and concrete is expected to be strong. It is mainly driven by global population growth, urbanization, and infrastructure spending. The latter is benefitting from governmental programmes to promote economic recovery from the impact of the Covid-19 pandemic. Unfortunately, global cement and concrete usage also accounts for around 7% of global CO2 emissions. The GCCA has recently released their roadmap to achieve net-zero concrete by 2050. No easy task.

Cement is hauled by ships in both distributive and balancing trades. Distributing cement along coastlines and between islands can include the use of sophisticated dedicated cement carriers. These have pneumatic discharge systems which effectively pump cement though pipework as if it were in liquid form. Balancing shipments between nations generally involves conventional bulk carriers with Panamaxes and Kamsarmaxes used in large volume and long-haul trades. Cement is often shipped in the form of cement clinker which must be ground in the receiving country to convert it into finished cement.

The shipment of cement clinker can prove tricky for analysts. The UN’s main code for cement (2523) includes cement clinker which is defined as a sub-set (252310). Adjusting for clinker trade is important when building a picture of national cement production, external trade, and derived consumption. For example, imports of clinker can easily be double counted by inclusion in both imports and production when it is ground down into cement.

The structure of most dry bulk commodity trades is relatively static with easily identifiable major exporting nations and key importing countries. Just think of iron ore, coal, and grain trades. Cement balancing trades can be surprisingly volatile. The classic example of this is the case of China. Back in 2006 and 2007, China was the world’s leading cement exporter shipping out over 36 million tonnes in 2006 and 33 million tonnes in 2007. Europe was a key importer fuelled by a building boom, particularly along Mediterranean coastlines. The financial crisis of 2008 brought that to an abrupt end. More recently, China has morphed into the world’s leading cement importer as domestic coal shortages and the shunning of Australian coal imports constrained cement production. Also the Chinese government cracked down on pollution.

In 2020, China imported nearly 36 million tonnes of cement via seaborne shipments, most of it in the form of clinker. 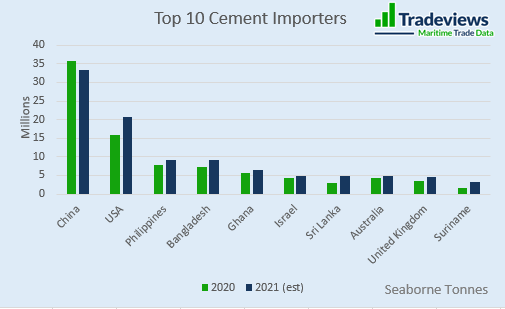 The US has long been a major importer of cement. Volumes fell back after the 2008 financial crisis but are now rebounding with nearly 21 million tonnes of seaborne imports expected this year. The US government’s $1.2 trillion infrastructure spending programme looks set to push cement imports still higher.

Population growth and urbanization is driving up cement demand and imports in several developing nations. Bangladesh, Sri Lanka, and the Philippines are leading Asian cement importers. In contrast, India has managed to constrain external trade in cement by rapidly expanding domestic production to cover sharp rises in its cement consumption. Africa is also experiencing strong growth in cement consumption, with Ghana and the Ivory Coast now significant cement importers. Rising demand is also leading to new cement plants being commissioned with Chinese companies particularly active in new projects on the African continent.

As for leading cement exporters, Asia has a new mega-exporter, namely Viet Nam which is expected to ship out over 38 million tonnes this year. Thailand, Japan, Indonesia, and Pakistan are also major cement exporters. 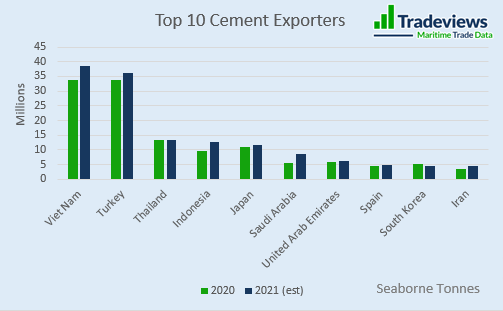 In the Middle East, Iran continues to be an important regional cement exporter, including overland shipments to neighbouring countries. The UAE and Saudi Arabia have recently emerged as leading exporters as they diversify their domestic industrial base. Further west, Turkey’s cement sector has rapidly expanded to become another mega-exporter shipping out just under 34 million tonnes of cement in 2020. Germany, Spain, and Greece are the leading European cement exporters while Canada is the leading exporter in the Americas, most of it shipped across the border to its southern neighbour.

While cement trade is an important minor bulk for shipping, the global cement industry also generates trade in other commodities. Cement companies’ power needs pull in coal and petroleum coke imports. The typically high sulphur content of fuel-grade petroleum coke can pose emission difficulties for thermal electricity generators despite the fuel having a higher calorific value than thermal coal. This is less problematic for cement producers as the sulphur is mainly absorbed into cement clinker.

Limestone is also an important component of cement. Despite being a widely occurring mineral, local shortages can generate significant import trade. For example, India imports limestone from the UAE using Capesize bulk carriers. Other materials consumed by cement plants that generate bulk carrier cargoes include fly ash, a waste product from coal-fired power stations, and slag, a waste product from steel blast furnaces. As the cement industry struggles to improve its environmental standards, other materials may well be added to the mix.

The pandemic has given a boost to cement trade from two sources. Surplus consumer incomes have spurred people into home improvements, building extensions and laying patios and driveways. Secondly governments have decided to invest more money in infrastructure projects to provide a bounce back from economic depression. The next few years look like they will be stronger for the cement trade as the pandemic drags on with emergence of more virus mutations.

To understand more detailed cement trade numbers, Tradeviews Trade Analytics Platform can really help. We have 20 years of data that can quickly help you quickly understand the main trends. If you are not a customers, please do contact us for a demonstration.