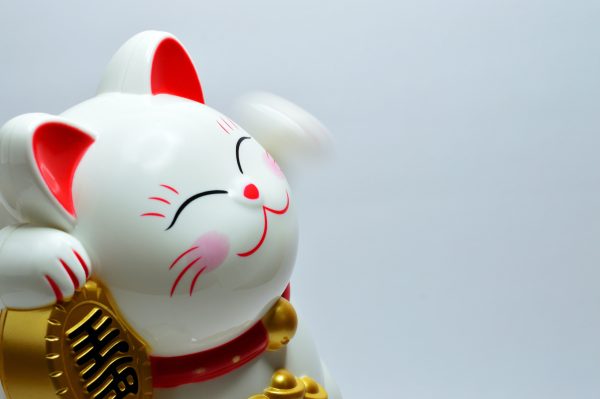 There are several factors weighing in on China’s trade influence: pandemic effects, trade spats and last but not by any means least, challenges with high commodity prices. Agriculture imports keep China’s trade healthy, whereas there is some short-term uncertainty over iron ore and coal trade. With a heavier rain season well underway, it will be interesting to see how China utilises its hydropower supply and the impacts this could have on coal imports overall.

We are currently experiencing the highest shipping freight rates since 2010. Understandably, the maritime industry is very happy about this. Why we have strong freight rates is a complex conundrum, explored in another of our articles. However, we have noticed higher commodity prices have the ability to positively influence demand for most commodities. This concept, mixed with the fluctuating struggles of major supplying countries throughout different waves of the pandemic, suggests there is more to this upwards trend than meets the eye.

As the leading manufacturing country, China will be hit hardest by steep raw material prices. Inflation in China is under pressure until prices come down. Or, alternatively, until China challenges high commodity prices. Various measures have been taken in order to drive commodity prices down, such as the introduction of harsher consequences for companies aiming to monopolise commodities. This so called ‘crack-down’ has led to a ‘5% drop in iron ore’ price and a 3% price reduction in other commodities including hot rolled coil, according to Global Times.

China has also recently increased the price of gasoline by 225 yuan according to the NDRC (National Development and Reform Commission). It would appear this is the result of the growing global price of crude oil yet could ultimately lead to a slight suppression of internal gasoline consumption in China. There is hope, as ‘OPEC+ says that overall conditions in the oil market have significantly improved in recent months’. There is, therefore, the expectation that more supply will be added to the market at today’s meeting, which should bring the oil price down to more comfortable levels.

On the face of it, there seems to be consistent performance for import volumes.

Agricultural commodities reached approximately 15.8 million tonnes in May 2021. Not a huge increase from 13 million tonnes compared with the previous month, however in terms of growth rate it is a considerable increase of 21%. But more impressive is this likely to be the highest ever Agricultural import level. 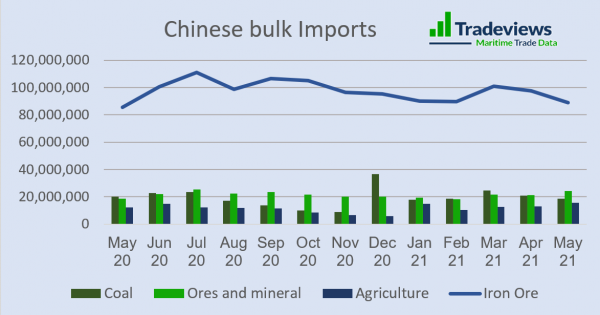 Ores and minerals are the highest they’ve been since July last year, reaching 24 million tonnes.  Bitumen in particular is doing very well, having almost doubled in May from 2.4 to 4.1 million tonnes. It looks as though China is once again building more roads, Either that, or pre-emptively stocking up on this cargo prior to the introduction of a new consumption tax in the following period. Whether this positive trend will continue is dubious.

Aluminium ore, Nickel ore and Manganese ore have all experienced a slight uptick as well.

Coal prices continue to build. China’s demand has stalled, according to recent AIS data, after heavy rain fall has increased hydropower adding to power generation. According to ‘Shipping Strategy’ Managing Director, Mark Williams, China’s ‘coal imports for May fell to the lowest level since 2017…while coal production was 326 million tonnes, up just 0.6 per cent year on year’.

Breakwaves writter Ulf Bergman said the trade spat between China and Australia may lead to reduced or even restricted imports of iron ore from Australia, sourcing instead from Brazil and the upcoming output by Africa. Any tightening on iron ore sources by China, ‘is likely to drive iron ore prices higher yet again’. This would be counterproductive whilst China challenges high commodity prices. It would also impact tonne-mile demand. Tradeviews data shows exports of Iron ore into China are at the highest level this year in May. This helps to explain the strong freight rates.

There is a lot to celebrate in the Dry Cargo shipping sector after a dismal previous decade. Our look at China this week goes a long way to explaining the strong freight rates. On the flip side, tankers are sadly in the doldrums. However, there is hope as stock levels are falling. Today’s Opec+ meeting will hopefully release more crude into the market.

China has a lot of power and influence over global trade. However, it’s recent meddling to try improve its trading terms have not really produced any spectacular results. The commodity market is still hot. This gives hope to maritime investors that this run of fortune will not be too short lived.