Come gRain or Shine – How Good is the New Grain Season?

Come gRain or Shine – How Good is the New Grain Season? 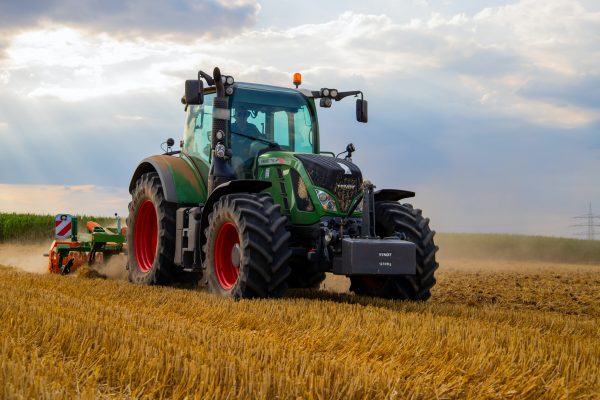 Agricultural exports from the Northern Hemisphere’s grain season have been facing turbulence under extreme weather conditions. We’ve researched the situation surrounding the coming grain season harvest to bring you an overall picture of the current grain market.

The output of the USA and Canada combined makes a big impact. The graph below demonstrates they constitute nearly three quarters of tonne mile demand for the main Northern hemisphere agriculture producers. The vast majority of the US volumes some from soy bean, however it is noteworthy that some vessels travel further than other locations. To put things in perspective, the US and Canada combined are only 55% of the pie chart when we look at volumes alone. 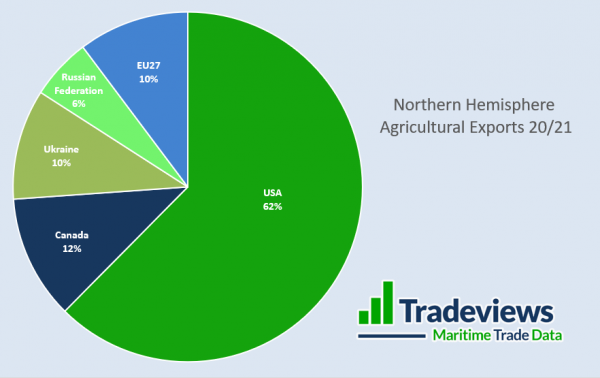 The vessel class that benefit the most from these trades is Panamax. They account for 50% of the North America volumes, while the Supramax and Handymax take a remaining 25% each. A strong grain season can move the whole dry bulk market as pressure on Panamax vessels can positively affect Capesize vessels too, as there is less to go around.

So while last year 20/21 season was particular good, what about the year ahead?

North America – The Elephant in The Room

North America has had significant droughts this year leading to lower yields by farmers. Canada is the worst affected with their wheat and coarse grain estimate falling by a third to 23 million tonnes compared to 35 million tonnes in the last marketing year. Although United States wheat and coarse grain estimates have fallen, they are perhaps not as bad as they could have been. They are estimated by the USDA to be 94 million  (excluding soy bean) from 107 million tonnes the previous year. That’s only a 12% fall, so given the circumstances facing the new grain season, the farmers have done well. When compared historically, its nothing too disastrous.

Warm weather and moist soil across Europe has boosted grain production. The expected yield is “now sitting well above the five-year average”. Despite dry conditions in Italy and Portugal, cooler weather here has helped to avoid any critical effects. Wetter weather in areas such as the Baltic has meant a lower yield of grain is expected from here. Furthermore, heavy cloud cover in parts of Germany and Denmark limited the all-important flowering process needed to enhance crops. This has resulted in a lower yield prediction.

If this season’s estimate is met, European wheat crops are expected to yield “7.3 %” more this year than “the drought-affected total of 117.2 million tonnes last year”. For barley, expected production is said to reach 53.5 million tonnes, across EU member states. “This is down 1 million tonnes from the May estimate and 6% lower than the final 2020-21 production volume”.

Variable weather conditions during France’s summer have led to additional difficulties for the Northern Hemisphere harvest. Farmers have had to adjust harvesting to work with certain weather windows. Whilst this has led to a fear over loss of volumes, production remains as expected. Early estimates remain at 37 million tonnes, which is well above last year’s crop of 29 million tonnes.

Rapeseed harvest is nearing, growing certainty for the rest of Europe. Despite cold weather and lack of rain falls further afield than France, Europe’s rapeseed production is estimated to yield 16.7 million tonnes this season, “5% above average”.

South Korea has become the top wheat importer for European produce: 407,000 tonnes of soft wheat have already been shipped there this month.

Wheat from Romania, bordering Ukraine, is rocketing. So far, 11.3 million tonnes are adding to a recovery from serious droughts in 2020 which made crops fall to just 6.4 million. Egypt is their main buyer.

Ukraine produces much more grain than the country requires, so exports tend to remain high. The country also boasts fantastic soil, “Ukraine is home to 30% of the world’s black soils, making it the ideal location to grow a large range of crops, including wheat, barley, corn, sugar beet, sunflower, soya beans and rapeseed.” The location of Ukraine on the Black Sea also permits good shipping routes to trade markets in Europe, Asia and Africa. With environments for both production, export routes and new trade agreements with the EU sorted, this creates a pretty successful dynamic for the Ukraine. The favourable weather Ukraine received for both winter and spring crops has only further boosted their harvest yields for this season. Excellent weather conditions allowed early seeding, providing more time to grow larger hectares of quality crops.

The grain seasons are interesting because they make a major difference to the bottom line for ship owners. Even if freight rates have been low all year a good grain season can offer the chance of a few moths of better trading. This year when freight rates are at their highest levels for 10 years a strong grain season could send things to the moon.

However, our assessment is that the new grain season will be good. Yet probably not as strong as last year. Better harvests in Europe and Russia have compensated for export declines from the US and Canada. However, there will be less tonne miles as a result. Voyages from Europe are definitely shorter overall, so the smaller size vessels are likely to reap the rewards in the next few months.

The chart below compares the 19/20 and 20/21 seasons to show you the range of variability. It includes all grains including soybean which is why the US is that much higher. Fortunes can certainly switch between the basins. 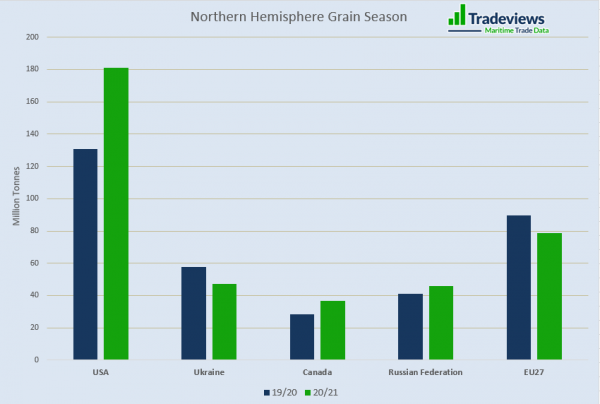 The weather conditions leading up to this season have been less than ideal. Trade across most grain exporting countries will likely recover well. It appears weather issues are in the way out – for now at least. It seems for parts of Europe, in particular Ukraine, grain is going strong. However, the dry, hot weather in North America has caused some serious issues for markets there. The saying goes, ‘every farmer has to be an optimist or they wouldn’t still be a farmer’. As is the same for those in the maritime industry.