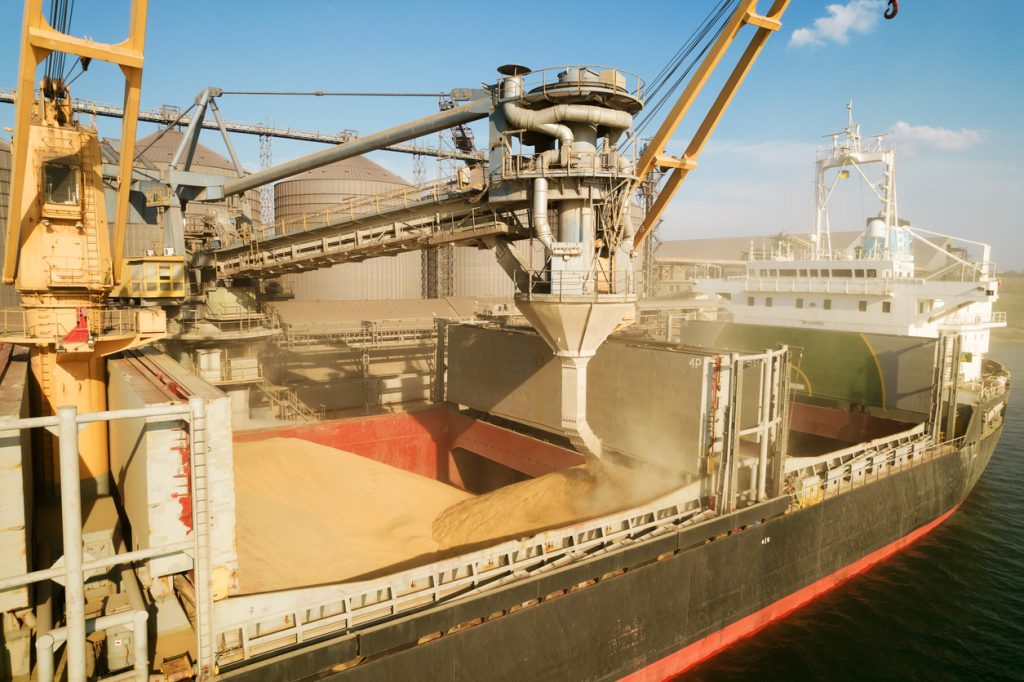 Agribulk trade in Odessa, Ukraine: Loading grain into holds of sea cargo vessel through an automatic line in seaport from silos of grain storage.

The UN’s World Food Programme has warned that the failure to open Black Sea ports is a declaration of war on global food insecurity and will lead to famine, destabilisation of nations and mass migration by necessity. Not a comfortable backdrop for writing a dispassionate article on how changes in global agribulk trade will impact bulk shipping. But here goes.

The United States Department of Agriculture has released its first pass at 2022/23 season crop and trade forecasts.  This has generated some negative headlines. The US wheat outlook signalled reduced supplies and exports. The global wheat outlook was also for lower supplies and consumption. Global coarse grain production is set to fall with corn production dropping from a previous record high. The global rice outlook was more favourable with 2022/23 production and trade hitting record highs. Soyabean trade in 2022/23 is also set to bounce back. Tradeviews has dug deeper into the USDA analysis to see what implications can be drawn for trade over the coming months.

For the uninitiated, USDA data can be difficult to understand given the plethora of marketing years. This refers to a 12-month period at the onset of the main harvest when a crop is marketed for consumption, trade or storage. In some instances, forecasts are put out in trading years rather than marketing years. At Tradeviews we analyse each country/commodity combination and apply historical monthly seasonal trade analysis.  This generates monthly forecasts from both outstanding 2021/22 and new 2022/23 USDA export trade forecasts. We also look at annual seasonal growth patterns and other longer-range analysis to estimate trade growth post 2022/23.

As a working assumption, we have restricted our estimates of Ukrainian grain export trade between April and September 2022 to one million mt/month. We assumed exports resume thereafter in line with USDA 2022/23 estimates. Some progress is being reported in making rail shipments of grain across Ukraine’s western borders with EU states. This suggests limited flows of wheat, maize and barley will get to outside markets. However, Ukraine’s grain transportation infrastructure remains heavily geared to shipping out of its Black Sea ports. At best, if an export shipping supply route could be instigated, then postponed shipments could surge later this year. The USDA has already sharply downgraded its Ukrainian grain export forecasts. With the war continuing to rage, there is a threat that grain shipments will continue to be heavily constrained. This could forced the USDA to trim its forecasts even further.

Ukraine is a major exporter of wheat accounting for around 11% of global trade in 2021. Our analysis shows strong growth in global wheat export trade in first half 2022, a levelling off in second half 2022 and further growth of around 7% year-on-year in first half 2023. The fact that wheat trade holds up this year is primarily down to a strong recovery in Canadian and Russian exports. These offset declines in Argentinian and US shipments. The USDA expected India to export 8.5 million mt of wheat over 12 months starting in April. But this is now threatened by a surprise wheat export ban due to heat curtailed production and record domestic wheat prices.

Also worthy of note is that half of Ukrainian exports in 2021 were short-sea shipments. Our data shows 37% going to Turkey/East Mediterranean/North Africa and 13% to East Africa and the Middle East. The loss of this trade will inevitably suck in longer-haul shipments from other exporting nations. 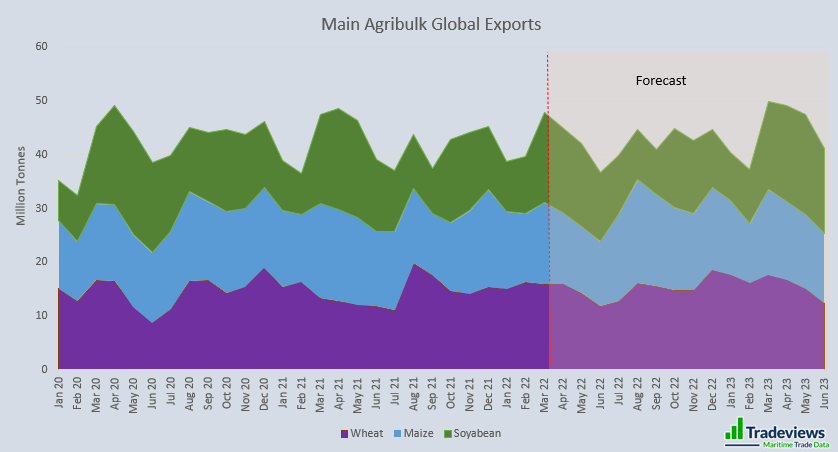 Ukraine is also a major exporter of maize accounting for 13.5% of global trade in 2021. The first half of 2022 is expected to register a 13% year-on-year drop in global maize trade. This is primarily down to record shipments in first half 2021 but also because of the war in Ukraine. Volumes are expected to recover in the second half of the year, up by just under 13% year-on-year. Global exports are forecast to fall back in first half 2023 primarily due to the seasonal impact of South American maize exports. This should still register growth of just under 3% year-on-year. Ukraine’s pattern of maize export trade in 2021 was more diverse compared to wheat. China was the main customer taking nearly one-third of shipments.

The global trade in barley is relatively small compared to wheat and maize. Ukraine accounted for 15% of global barley export shipments in 2021. Just over half of this trade went to China while one-third comprised short-sea shipments to Turkey/East Mediterranean/North Africa. Overall trade is expected to shrink particularly in the second half of 2022.  Shipments from Australia and the EU are expected to reduce year-on-year. The global trade in barley has also been skewed by China’s import ban on Australian barley.

Turning to agribulk trade commodities less directly impacted by the war in Ukraine. Soya bean export trade is set to track lower this year due to the impact of droughts in South America. This was after record shipments in 2021. However, trade is projected to bounce back in the first half of 2023. The USDA are forecasting solid growth in production and exports in South America’s 2022/23 soyabean seasons. Meanwhile, US soya bean exports are expected to continue to grow. Volumes are expected to rise 4% year-on-year in second half 2022 and up 5.5% year-on-year in first half 2023. China remains the dominant importer of soya beans accounting for just under 60% of global trade.

The outlook for the soyabean meal export trade is positive with steady year-on-year growth in 2022 and into first half 2023. The USDA has production gains in both Brazil and the US outpacing domestic demand growth. After dipping slightly in first half 2022, Argentina’s soya bean meal shipments are also expected to grow over the next 12 months.

The global trade in rice is also expanding with the USDA forecasting record production and export trade in 2022/23. India is leading the way as the largest rice exporting nation. Strong growth in export trade is also expected in Thailand and Vietnam. 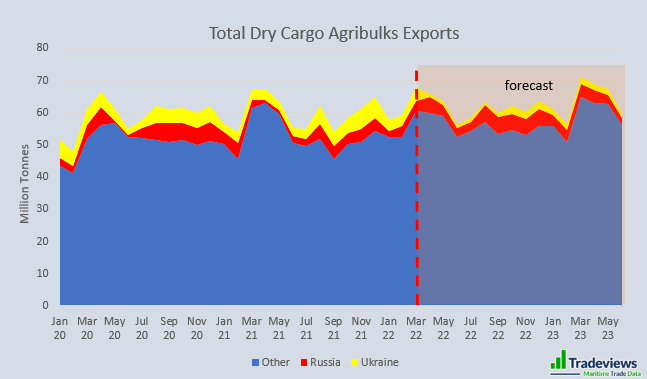 The USDA forecasts result in growth in export trade outside Russia and Ukraine, particularly in second half 2022. In addition, Russian grain exports are set to rise sharply with the USDA forecasting jumps in Russian shipments of both wheat and barley. We also expect some gains in average voyage distances due to the disruption in traditional shipping patterns. However, we are mindful of the risk that sanctions could act to constrain Russian grain export volumes or that Russia could decide to restrict grain exports in reaction to sanctions.

The resilience of agribulk trade continues to support the dry bulk freight market. However, there are other factors also at play. Dry bulk carrier fleet growth remains benign as shipowners and shipyards concentrate on building containerships and LNG carriers. Problems with containership logistics has pushed more agribulk cargo over into dry bulk shipments.

The war in Ukraine has provided at least a short-term boost to international coal trade as Europe struggles to replace Russian gas supplies. The war has also led to a surge in oil prices with low-sulphur fuel oil in Singapore pushing over $1,000/metric tonne in late May providing further incentive for shipowners and charterers to slow steam ships. Another major factor is congestion particularly at Chinese ports impacted by recent Covid 19 lockdowns. With Capesize vessel TC rates bouncing around this promises to be a volatile period. There are many push pull factors working at full velocity. We hope Tradeviews can help you navigate a path through the choppy waters.