The Tanker Market: In Need of Good Fortune

The Tanker Market: In Need of Good Fortune 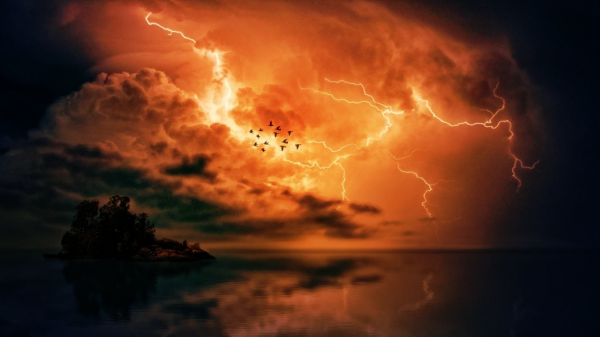 Tanker markets started the new year tentatively, with dragging effects of the pandemic. OPEC continues to be unswerving in its oil production policy. Along with this comes the impact of the unforeseen incident in the Suez Canal, a promise for a tanker market in need of good fortune perhaps?

Although the new year boded a positive trend in the oil market, the third wave of the pandemic frustrated ship investor hopes for increased freight rates. Tanker earnings have come under severe pressure in recent months, while further restrictions and lockdowns around the world continue to affect global oil demand. Suffering the most was VLCC. Suezmax and Aframax markets were firmer, expecting to grow the most during 2021.

Asia is by far the largest importer of crude oil, compared to other continents. China, obviously, contributes significantly to these huge quantities being the country that has played the role of a ‘stabiliser’ in global trade many times. According to our data however, Asia has experienced an almost complete recovery since October, whereas Europe and North America have seen a slower return of volumes. 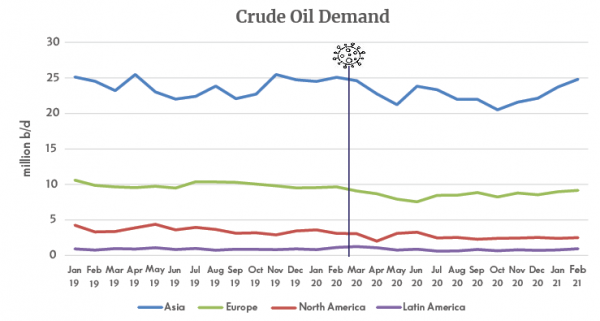 Comparing 2020 to 2019, Asia had a 5% drop in Crude Oil, while North America and Europe fell by 26% and 11% respectively. As Europe is now edging back, North America appears to be flat lining.

OPEC is a key factor for the tanker market. Its oil production policy controls a high portion of the tanker volumes. Not surprisingly, it is responsible for the production of the majority of the crude oil which is traded. 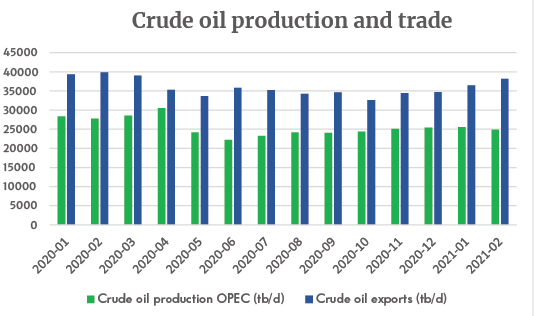 From the beginning of the pandemic, OPEC started oil production cuts. The aim was to prevent a possible oversupply resulting from the demand collapse in order to stabilise the oil price. Overall, OPEC did manage the new situation, although there were some exceptions during March and particularly April 2020, when more oil was produced. (Note the paradox in oil production, graphed above).

OPEC’s policy was firm, even throughout periods of up ticked demand. This containment on the supply side had consequences in the global oil market, where we see the price rising in recent months.

Amid the ongoing pandemic, OPEC’s recent decision was to gradually curb existing output cuts in the beginning of May. The upcoming months are forecasted auspiciously, not only due to seasonal demands. Present uncertainty could change the given situation for a tanker market in need of good fortune.

The Impact of the Suez Incident

The blockage of the Suez Canal from the Ever Given, grounded during March 2021, was indeed an uncertainty. The incident took place during a vulnerable period for tanker shipping and, by extension, for the global economy. For the less informed, it may have been seen as an extremely detrimental incident for the whole shipping industry. On the contrary, the tanker market saw it as a bit of luck in the middle of a storm.

The Suez incident was a relief for freight rates. Due to congestion, many vessels were taken out of the market, decreasing the supply side. The result was an increase in freight rates which would have otherwise been short lived.

It is beneficial to consider the impact of this incident over time. Now that the canal is operating normally, the area is gradually decongested. Beyond that, the level of fleet capacity engaged in floating storage also continues to ease, exerting further supply side pressure. Consequently, we can claim that this sudden rejuvenation for the tanker market offered only short-term gains.

For a long time, the tanker market seemed like a pendulum trying to balance. OPEC remains stable in production output, causing a rise in oil prices and discomfort in already low tanker earnings. With the tanker market in need of good fortune, it remains depressed with returning demand likely to be tentative as output increases. Every returning wave of the virus continues to suppress any chance of an exuberant comeback. Many were hoping the Ever Given would be wedged in for longer.  Now we’re hoping for a sustained upturn as we head into the northern hemisphere summer.