Shipping is the Winner of the Trade Dispute… For Now

Shipping is the Winner of the Trade Dispute… For Now

China’s Trade dispute with Australia provided a bonus for an already strong dry bulk market. But who will emerge as winners? Time will tell. However, the event has boosted freight rates. Vessels taken out of the market, not allowed to discharge, have led to short term gains. If the dispute rumbles on the gains could more than disappear. Longer term coal trade could reduce in tonne miles due to alternative, more local coal suppliers.

The Importance of Coal

Coal is a significant commodity in the maritime trade. China and Australia are responsible for large quantities of coal traded. China is the largest importer, accounting for the 18.5% of total coal imports, while Australia generally exports 395 million tonnes. which is responsible for 28.5% of the total coal exports in 2020.

Iron Ore Compared to the Other Bulks 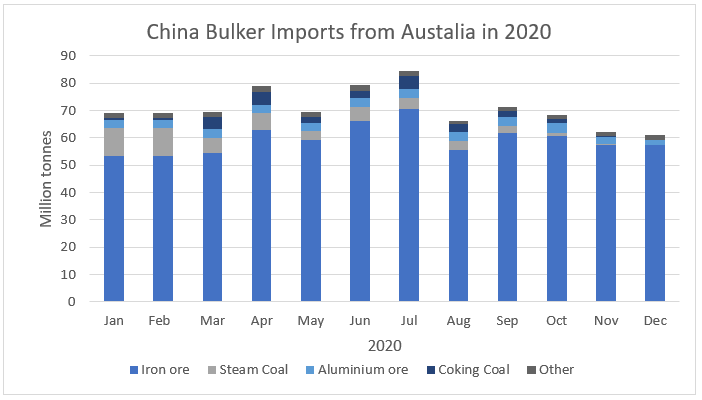 China is highly dependent on Australian iron ore, to meet their steel production targets. To increase their leverage on prices, China has reduced trade in other bulks, included steam coal, coking coal, and grains. They imported approximately 15 million tonnes of all the other bulks in January 2020. This quantity decreased significantly to 3.8 million tonnes by December. China is really trying to create negotiating leverage for iron ore prices by starving off other key Australian exports.

What has happened to Chinese Coal Imports? 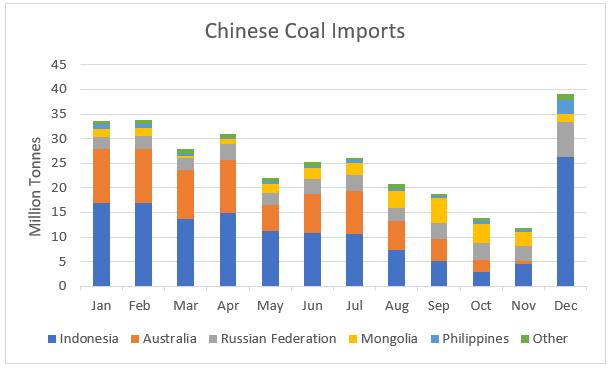 You can see that Australian coal imports have gradually disappeared (orange bar). Roughly one third of this market is now distributed to other players.

With such a rapid adjustment, there is the potential for increased tonne mile demand as global patterns shift to adjust for Chinese action. This time it’s worked the other way as more local suppliers have been used like Indonesia, Mongolia (non-seaborne) and Russia. Average coal miles have dropped from 3400 miles in January to 3300 miles in December. Obviously, there are some coal cargoes traveling from further afield but these are smaller in volume.

Congestion made the difference

Congestion is the real bonus from this story. Currently, there are approximately 60 vessels, waiting to discharge Australian coal in China. In other words, there are 60 Panamax and Capes vessels out of the market according to ‘Splash 247’. The quantity of stranded coal is estimated to be around 6.5 million tonnes.

When we compare export with import customs data, its clear congestion was a problem for coal cargoes from other countries too. August to November data shows when vessels departed, it was several months before those cargoes cleared in the Chinese customs numbers. This partly explains the spike in December.

In shipping there are involved many players. Each one acts based on its interests. However, cooperation is inevitable as well as necessary. In cases when trade relationships and agreements are disrupted, there can be deep consequences.

China and Australia are major traders in the global maritime trade. The Chinese bans caused a positive disruption in the whole shipping sector. Both the coal trade and the global supply of tonnage were affected. This no doubt a major factor in supporting the high freight rates of recent months.

China has found other exporters of coal in order to meet its needs although the disruption has come at a cost with power outages and some industrial output curtailed. Australia is also in a vulnerable position with a suppressed export market. The main question is, how quickly these two giants can come to an amicable agreement, as clearly, they’ve been damaging each other.

The only winners appear to be shipping sector this time round. However, if this turns into a longer term dispute and the idle vessels unload their cargo, there will be less coal tonne miles available and ultimately this dispute could end up being a drag on dry cargo freight rates.