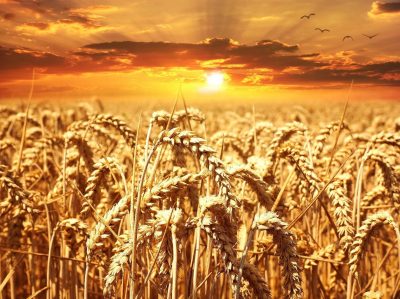 The peak season for grain production is coming to an end in the Southern Hemisphere. Brazil and Australia have proved to be strong performers for Agricultural exports, compensating for the difficulties Argentina has been facing with trade bans. Usually, this trio are the biggest exporters of grain. This time, the two aforementioned countries have added an additional layer of support for the Dry Cargo market. It is now proving to be a good year for grains overall as Southern grain production soars.

Brazil, Australia and Argentina are the leading nations in the southern hemisphere agricultural sector. They produce and export the largest quantities of grains, when harvest is typically January to April. Grain remains the most variable commodity in seaborne trade. This is due to its vulnerability facing changeable weather conditions and seasonality.

This year started strong, albeit from a low base for soya bean. In March 2021, Brazilian soya bean exports were moving at a record pace. They shot up to 13 million tonnes, representing a 23% and 47% rise compared with the same month of the last two seasons. Key months for major increases in the exports were March until June. Therefore, it is predicted that throughout the coming months a strong trend will be maintained.

The Maize trend is quite different. Largest increases were observed in the third quarter of the year, where maize contributed significantly to the total volumes. September and August were the peak months of the two previous years, with exports counting 6.4 and 7.6 million tonnes respectively. In contrast to the peak season, the first quarter of the year is extremely weak. 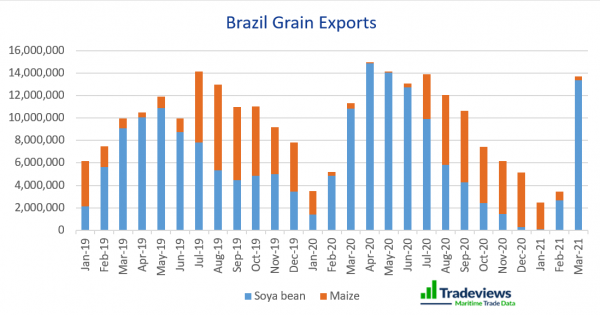 The trade of wheat and barley in Australia follows a similar pattern. Generally, the peak season starts in December and lasts until May. The unusual, yet extremely positive, outcome for both grains is their remarkable uptick during the trimester starting December 2020. Wheat peaked in February, reaching around 2.7 million tonnes. Of course, this is the result of record high production rates which reached record levels mixed with favourable weather conditions. Consequently, the question arises: Where is this Australian wheat going?

Not surprisingly, China is the main importer of Australian wheat and has experienced rising consumption of grain since the re-herding of swine livestock. Throughout this period of high demand, China’s goal also was to import as much grain as possible. Despite some trade tensions between the two countries, the high export tonnage is an indication that the wheat trade remained unaffected and Australian wheat is still in demand in China. Along with China, exports to Indonesia and the Philippines also significantly increased. 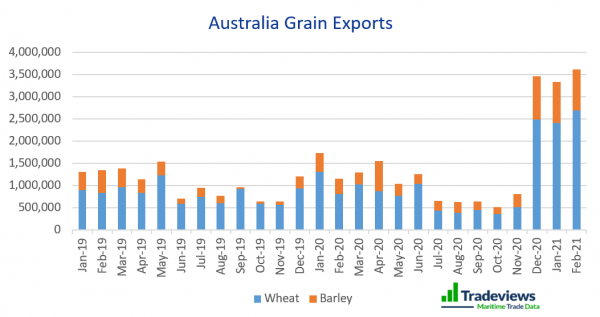 Argentina’s performance in the first two months of the year declined compared to the previous year. Wheat trade saw the greatest reduction. The decline is likely a result of suspended corn exports, announced in December, 2020. Of course, this angered South American farmers. In January, Argentina then temporarily capped international trade at 30,000 tonnes daily. Despite this ease on restrictions, exports of wheat were 57% less in January. This caused a direct, negative effect on the total grain volume of this month.

In 2020, Maize and Soya Bean had their strongest months between the second and third quarters. These two commodities are predicted to rise in the following months. Wheat exports were strongest from December to March. However, exports were dropping from April until August last year. Despite this, trade of maize and soya bean both balanced and improved the total volume for this period. In the diagram below, the positive trend is clearly evident in these months. 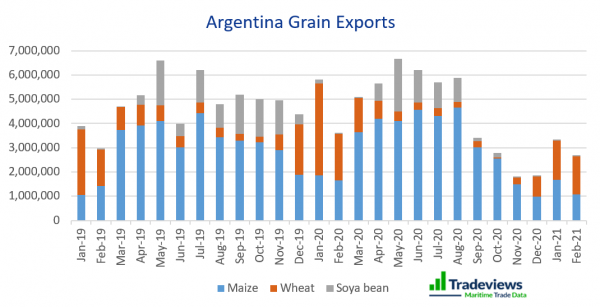 ‘Long live the bumper crop’. With Brazilian March numbers higher than the previous year, we expect soya bean will experience very positive export levels. Ideally, this should coincide with China’s rising demand for grains, leading to increased trade deals all round. For the first time in several years, Australia has experienced their most productive grain season. This has in turn compensated for Argentina’s declining volumes over recent quarters.

We suspect the overall high performance of the Southern Hemisphere’s Grain season has been a key contributor to the unusually strong Dry Cargo freight rates present during this first quarter.