India’s Trade in the Second Wave

India’s Trade in the Second Wave 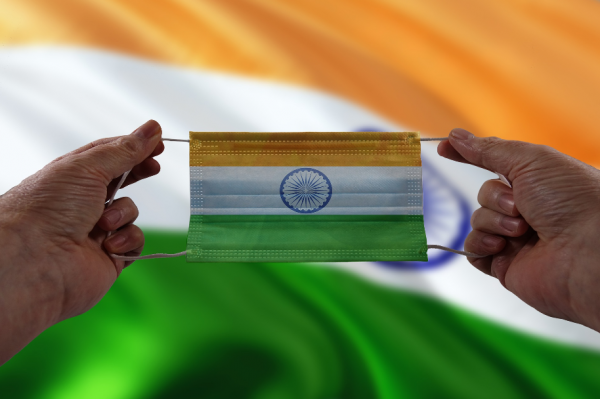 India is the 3rd largest dry cargo importer and 2nd largest tanker importer. Based on the country’s trade performance in recent years, India is considered as one of the world’s largest emerging market economies behind China. Despite this fact, their development was not enough to act as a counterweight to the effects of the pandemic. India went through a significant slump in 2020, however they managed to recover after the first wave of the pandemic. What will be the consequences for India’s trade in the second wave?

Imports are the driving force of India. Throughout just one year, 2017 to 2018, India succeeded in increasing its total dry imports by about 50 million tonnes. The following year added 10 more million tonnes, reaching 363 million tonnes. It was undoubtedly on an impressive growth trajectory… until Covid-19.

India suffered severe losses due to the pandemic. During the most crucial months, March and April 2020. Total dry imports experienced decreases of 15% and 25% respectively, according to Tradeviews data. Adding all the tanker volumes together, the largest reduction was recorded in April 2020 with a decrease of 27%. The concern now is how will India trade react to the second, far more aggressive wave of the pandemic.

However, during February 2021, an intense second wave of Covid-19 emerged. The situation progressively worsened in April, and peaked in May 2021. The consequences of this more or less ‘familiar’ situation became visible immediately: India’s demand for coal decreased significantly in February, from around 24 to 16 million tonnes. Some hope came when March recorded a slight uptick, however the next few months will be the most decisive. 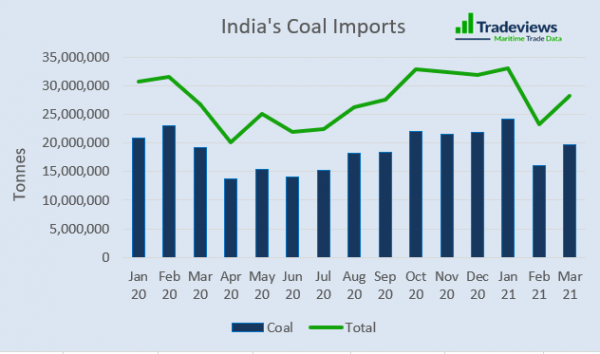 Two other groups of commodities which largely influence India’s total imports are ore & minerals and fertilizers. According to our data, ores & minerals (with limestone leading the group) appeared relatively resilient at the start of second wave. Even during February, India’s demand increased by 5% with further rises in March.

India is the world’s second largest oil importer after China. While it had a consistently upwards performance until 2018, the next year recorded an important reduction from around 225 to 220 million tonnes. As a natural consequence, 2020 crude oil imports decreased further by 11%.

In terms of the effects of the pandemic, the weakest month was the previous May. The low levels of India’s crude oil imports remained until November, with very slight fluctuations. December was a really promising month, reaching 22.5 million tonnes. The new wave of virus will certainly add downwards pressure. The first three months of 2021 recorded the lowest levels of crude oil imports compared to the corresponding months of previous years. 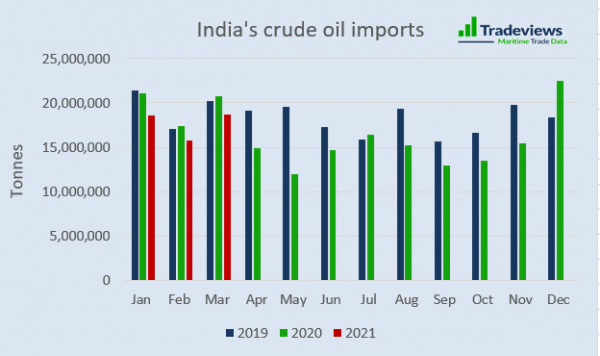 India is still an emerging economy with an ever-expansive trade activity based on robust imports. Τhis growth could not be sustained by the effects of the pandemic unlike some of its neighbours. During 2020, and specifically during the first half of the year, India experienced major decreases in its imports, both in the dry bulk and crude oil.

Even though India bounced back the first time, it looks India’s trade in the second wave will suffer on a personal and fiscal level under the new variant. Amid such conditions, the new wave could add a downwards pressure on India’s demand for cargo, particularly coal. Of course, governmental policy and restrictions concerning the lockdowns and trade will influence India’s trade future. Whatever happens, over the next few months we’ll start to see if previous events are to be repeated.