Ever Stuck: The Cargoes Exposed by the Suez Incident…

Ever Stuck: The Cargoes Exposed by the Suez Incident… 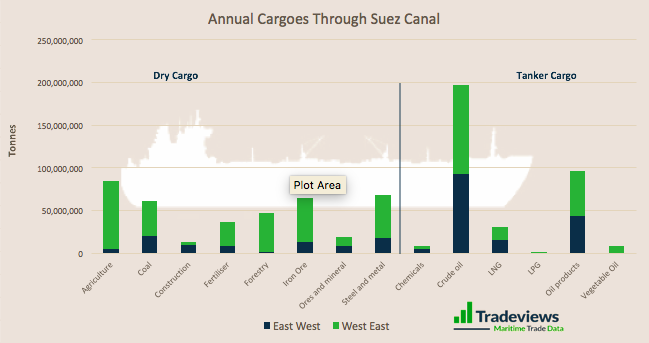 As congestion grows in the Suez Canal, how can cargo trade impacts be anticipated?

Container trades have the most to lose. A key trading route for consumer goods from Asia to Europe is blocked. But what about Tankers and Bulkers? Surprisingly, the largest exposure for Bulkers is West to East with an annual trade flow of 309 million tonnes (2020). Tanker’s trade flows are fairly balanced in both directions, with just over 150 million tonnes each way. Interestingly, for each given cargo category, the receiver exposure for cargoes traveling through Suez is relatively low, as we will demonstrate. This article will highlight which of the cargoes are exposed by the Suez incident.

Dry Cargo travelling West to East will see the greatest impact from the incident. Receivers have an average of 8% exposure from Suez routes. On the higher end: forestry with a concerning 23% exposure, steel at 23% and agriculture, including grains heading to the Middle East, with 19%.

Amongst dry cargo heading East to West, steel, fertiliser and construction commodities show the highest percentage of exposure. Dry Cargo along this route will see a total of 10% exposure for receivers with much lower volumes. As the West’s steel exposure reaches 18%, prices are already on the rise because of growing demand. Fertilisers register exposure of 18% and Construction at 10%.

Tanker Cargo from East to West totals approximately 158 million tonnes per year and has a receiver exposure of 19%. LNG, Crude Oil and Oil Products experience the greatest impact of 23%, 20% and 18% respectively. It’s likely the exposure on Crude Oil will largely affect cargo departing from the Arabian gulf.

Tankers, East to West, reflect only a 9% receiver exposure on roughly 185 million tonnes of cargo per year. Key impacts being on vegetable oil at 19% and 15% for oil products. It’s likely oil products will see a reaction from shorter sea neighbours in order to compensate for this exposure.

We believe markets will quickly adapt to shortfall in cargoes. Furthermore, that stock buffers for essential energy-based cargoes should be able to cope with the disruption. Other commodity groups experiencing high commodity prices, like steels and grains, should see a scramble for cargo. Therefore, exacerbating already unusually high freight rates.