Are You Following Commodity Prices?

Are You Following Commodity Prices? 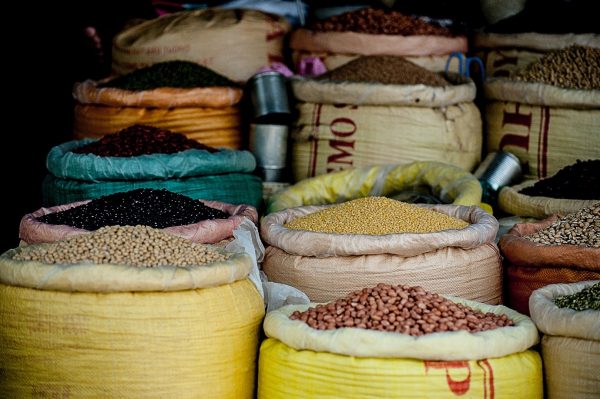 Every once in a while, the dry bulk market seems to take off. Last time it was when China forgot to tell the world that it was reforming its economy. Now, it’s because of pent-up demand from a locked down world. In both scenarios, commodity prices soared! Are you following commodity prices?

‘What has happened to commodity prices?’ you might ask. To give you a quick summary, iron ore prices have doubled since May last year from approximately $80 to a peak of over $220 in early May this year. It’s a similar story for coal, which was $50 last year and is now just reaching $100 per tonne. Grain prices are also on a similar trajectory but with more variability. Wheat prices were about $500 a tonne last May and they peaked at just over $750 at the beginning of May. Soya bean prices have doubled in price. Steal prices have also almost doubled from this time last year. The story is the same for copper and so on.

Why look at commodity prices?

Shipping analysts are often shy in regards to following commodity prices. Understandably, they like to focus on pure physical volumes. However, looking at commodity prices as well often completes the picture and tells us the state of global demand versus supply and what is likely to happen. 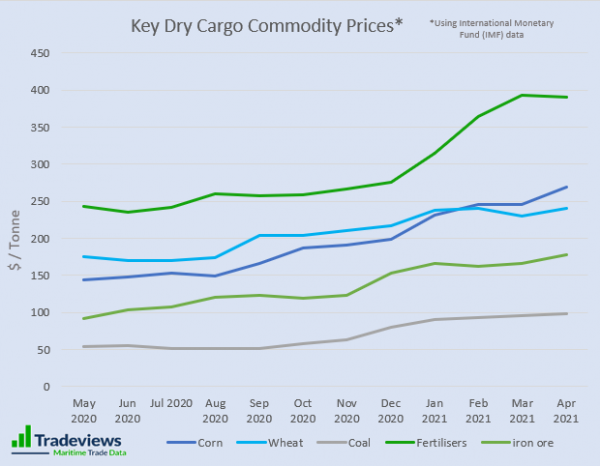 So, what’s happening now? I can’t ever remember a time when all dry cargo commodity prices were pushing so high. Simply put, supply has not been able to keep up with demand for most commodities. When commodity prices are pushing high, commodity producers are incentivised by whatever means to increase output. This cannot happen overnight but what we can expect for the remainder of the year is building volumes as mining output grows.

In the first quarter, Vale shipped 68 million tons from Brazil. Their annual production target is between 315 and 335 million tonnes. Reduced into quarters this is 81.25 million tons on average. We can therefore see the shortfall of over 12 million tonnes need to be made up in the following quarters if they are going to reach their target. Highly incentivised by the commodity price we expect them to start achieving this. Remembering the distance which iron ore travels out of Brazil has got to translate into good things for Capesize freight rates.

When we look at Rio Tinto iron ore production, in the first quarter they slightly undershot. They shipped 77.8 million tonnes which was less than their production target of at least 81.25 million tonnes. The reasons for this were weather problems, maintenance disruptions and staffing issues.

We anticipate strong demand for other commodities too, especially when the ores and mineral providers will be doing what they can to increase production over the coming months. Commodities like grains are normally limited by factors like weather. However, we do see record Maise (corn) exports coming out of the US. This is partly due to less volumes going into biofuels, like ethanol, because of reduced gasoline demand.

In our last article we looked at the mystery of why cargo volumes went down while freight rates went up. There was clearly another dynamic going on where the shipping freight rates maintained their strength. We saw inefficiencies creeping in that soaked up the fleet. While commodity prices are in this higher band across the board, we can expect this sort of thing to continue. Therefore, whether there is physical supply or not, dry cargo shipping seems to be supported at this time by commodity prices.

We also did a study earlier this year looking at the relationship between freight rates in different vessel types vs the commodity price of the cargoes carried. What we found was there was a strong correlation in the Supramax vessel types. Handysize and Panamax vessels had a medium correlation, while we found a weak correlation in Capesizes. 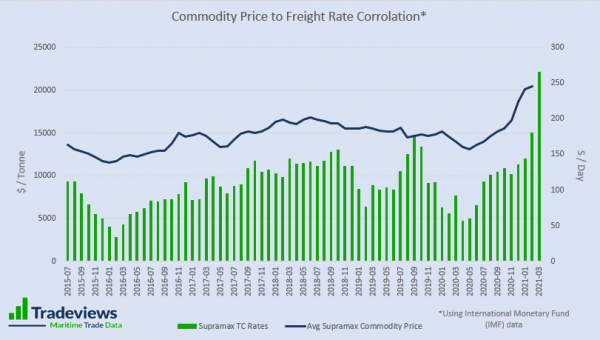 Although we weren’t overly scientific, it did indicate to us it’s worth following commodity prices to get a feel for the direction of the dry cargo market and to add more depth to our analysis.

With vessel order books at record low levels, this is the first time for a long time that dry cargo shipping looks to be in a good place. If we look at publicly listed dry cargo companies, their share prices have languished and declined consistently over the last 10 years. However, in recent months most have at least doubled. Optimism is high!

Are there any headwinds?

Covid-19 has been the stimulus for this commodity demand surge. The path of the virus is still unknown. India is in turmoil. We don’t know how many new variants are going to arrive or how long vaccines will be effective. If humanity manages to control the virus, then there will be a few years of stimulus to counter the devastation caused to many businesses in the service sector. After this, there’s a war sized debt to pay back for many countries. Economists will be working out how to do this effectively… but it will be hard.

US inflation is also a concern to many economists. When the Federal Reserve announced US consumer prices rose 4.2% from a year ago, stock markets reacted and fell in most countries. Rising commodity prices are feeding their way down into consumer goods. The fear is always a rise in interest rates, that would be the handbrake for economic growth.

The Chinese economy is also a concern. Chinese corporations are defaulting on government bonds at the fastest rate on record. Estate agents and developers are the highest group on this list. There is $1.3 trillion which is repayable in the next 12 months, 30% higher than what US companies owe.

This article demonstrates that commodity prices are worth following and could provide an edge in shipping investment strategy. We have shown that for the medium-sized vessels, commodity prices have a strong correlation to demand and are therefore worth tracking.

Hopefully, we have armed the shipping analyst with more understanding of cargo trade and although there are some concerns in the economy, we have conveyed our hope of an unusually good year ahead.