Following the killing of the Iranian military general Soleimani, tension between the US and Iran are running high. Retaliation by Iran for the attack has taken place but how vulnerable is the Strait of Hormuz? Last year saw a list of events in the escalation of tension that directly targeted maritime assets. If this should happen again and tankers avoid the region, how would this affect global tanker demand? To get to the bottom of this question we need to ask three more:

1) Is there any precedent for the effect of falling tanker volumes from the Strait of Hormuz?

2) Who buys the oil/oil products from the region?

3) Who can pick up the volumes should they fall and what is the tonne mile impact?

Is there a precedent?

When we look at the events in the region last year, it’s difficult to remember what, when and by whom? There are seven countries affected by the strait: Iraq, Kuwait, Bahrain, Qatar, UAE, Saudi Arabia and of course Iran. From this list Saudi does have another coastline along the Red Sea linked by a pipeline. If you look at all tanker volumes exported from the Strait last year, there only seems to be affects in June and September. Consequently volumes fell by approximately 10% each time, and then returned the following month. 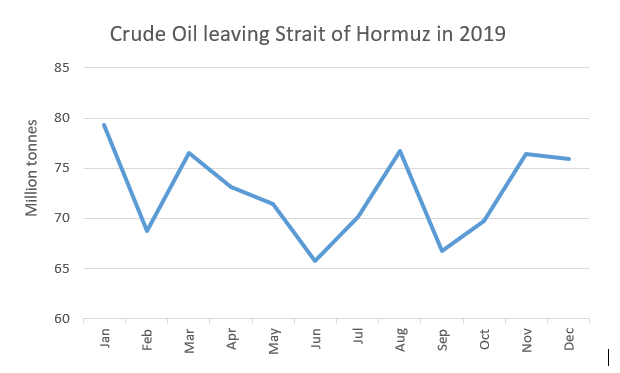 On June 13th two oil tankers were on fire from limpit mines or drone attacks.  On September 14th a coordinated cruise missile and drone attack targeted Saudi Aramco oil processing facilities at Abqaiq and Khurais in eastern Saudi Arabia. There were many other events and posturing but it seems that the events in June and September were the only ones to affect physical voyages.

The 10% decrease only appears to affect crude oil volumes. Oil products, LNG and LPG all seem to remain intact. Looking at the global picture there was no correction. Volumes fell in those months from the Middle East but there was no obvious compensation elsewhere. This tells us there is a bit of slack in the system. Stocks at refineries appear to be healthy. Sadly, this story doesn’t tell us about substitution possibilities with other countries. The lesson we can learn is the region can handle short sharp shocks.

Who buys oil from the region?

The answer is mainly Asia, particularly China, the Far East and South-East Asia. The region exported approx 870 million tonnes in 2019 and 81% of that went to Asia. Europe took 10% and North America 6%, obviously nothing headed from Iran to USA.  This leads into the third question of who can replace volumes into Asia if the Strait was affected. 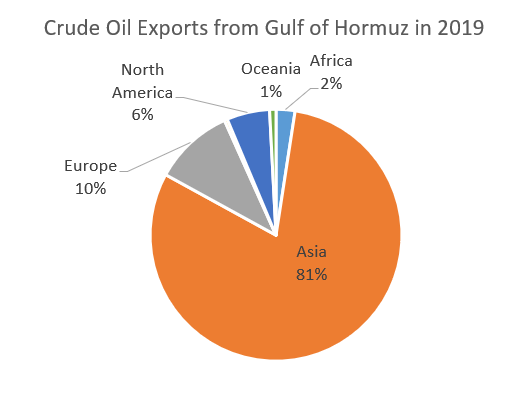 Who can replace Middle East volumes into Asia?

The average miles for vessels leaving the strait is under 5,000 nautical miles. The next largest supplier is the Russian Baltic at 11,459, Angola at 8,941, US Gulf at 10,484 and Brazil at 11,459. If you look at the average miles for vessels into Asia excluding the Strait it’s just over 8,000. This is a 60% increase over the Strait of Hormuz average. Now we can see all the obvious replacement candidates, its clear to see that overall tonne miles will increase, should tankers deviate. This is of course providing other oil producing countries can supply.

Looking at last year’s data the Strait of Hormuz coped with a number of shocks. The increased oil price probably deterred immediate buying from other regions. If disruption went on longer then you would see vessel changing routes. This would provide a positive benefit for tanker vessel owners. Vessel will be traveling further, sending freight rates higher. This scenario would happen just as long as there are enough oil reserves in the rest of the world to meet that demand.

The year 2020 has ushered in uncertainty and strife. We wait with interest to see how the story unfolds.