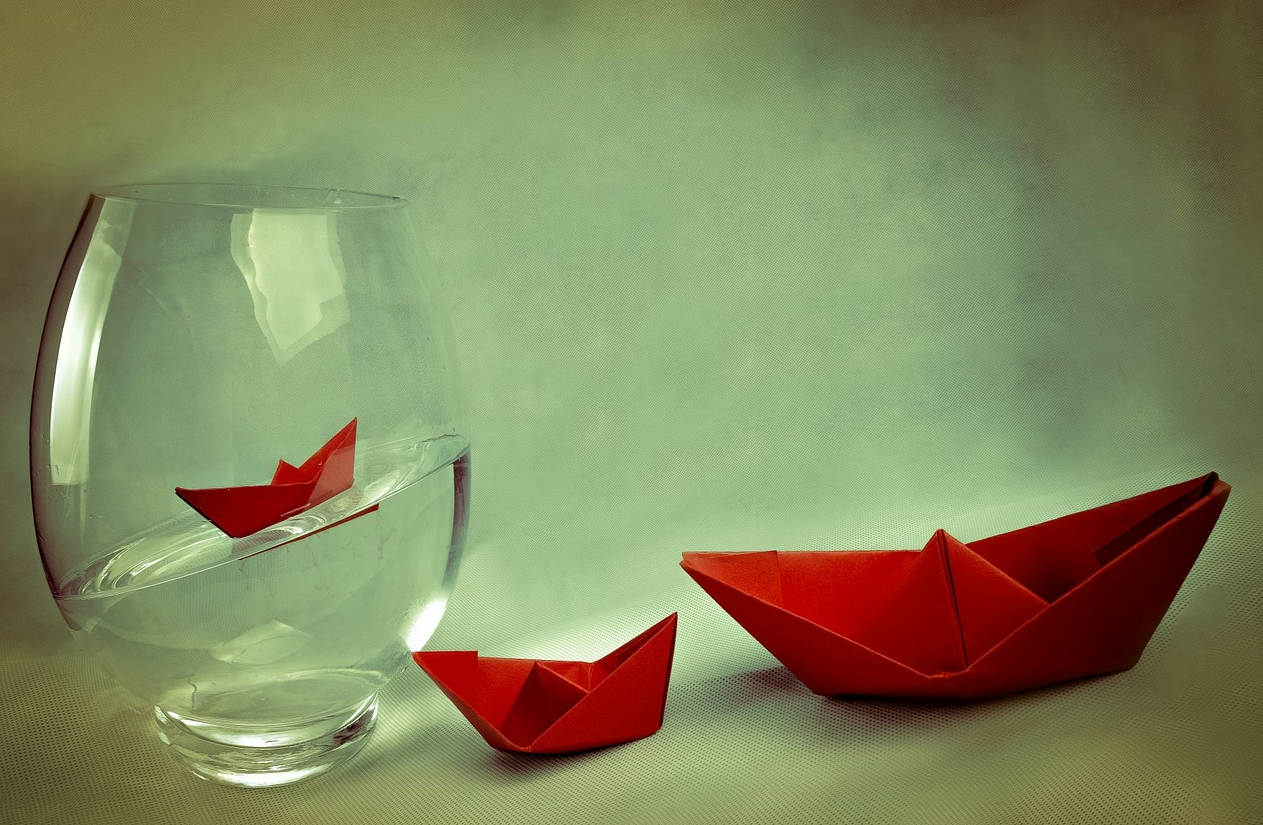 History will probably look back at 2020 as a key marker for trend change in a turbulent tanker market. China plays again the major role in this field, without this surprising anyone. It was undoubtedly an unprecedented year for the shipping sector but China remained the ‘stabilizer’ among other giants in the oil market.

A paradox in oil production

Demand influences output. This is an economic principle in trade, in order to achieve an equilibrium in the price. The pandemic caused a significant decrease on the demand for oil. However, during March and April, the production was at really high levels, and here lies the paradox. Let’s take a look at the facts that caused a turbulent  tanker market.

OPEC proposed to Russia, which is one of the biggest producers of oil, to deepen oil output cuts, because the demand had already dropped significantly. Then Russia denied, and Saudi Arabia raised its output. The result was a significant surplus of crude oil and therefore a sharp drop of the oil prices. After negotiations, OPEC and major G20 producers agreed to implement unprecedented global oil supply cuts from May 1st, in order to improve oil prices. 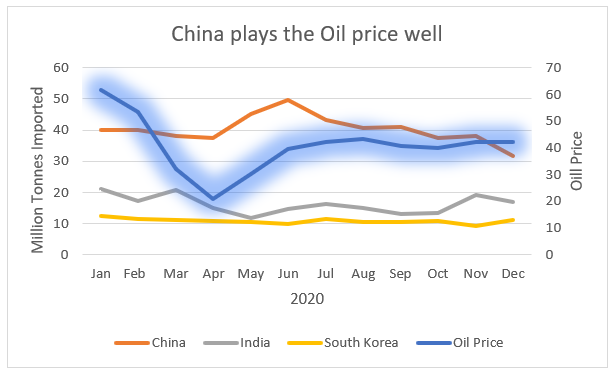 China was one of the only countries to play the oil market well. As illustrated in the diagram above, based on Tradeviews data, they exploited the collapse in oil prices. They increased the imports of crude oil. Especially from March until June is as clearly depicted the relationship between the imports and the oil price.

As the price fell, Chinese traders filled up their silos, floating storage and fuel tanks. The sudden high demand caused a lag in landed volumes but traders continued doing the deals as prices rose which means China played it perfectly. This meant at a time when global volumes fell to most countries China’s buying spree gave hope to tanker owners and indeed it contributed to rates going higher. China has a history of getting the commodity market right. In 2009 after the global financial crisis commodity prices fell when the world was in fear. That’s when China doubled down.

No one can deny that since China increased global trade, they’re aware of their strong position. Of course, its size and population explain this commercial flourishing, however China’s strategy proves to be particularly durable and effective. 2020 was not an exception.

The graph below shows that demand growth of crude oil was already slowing during the last 5 years. Due to the pandemic, 2020 was, as could easily be predicted, the worst year. The demand for crude oil fell sharply among major importers. China, although starting from a higher base, was still able to keep a positive percentage for its oil demand. 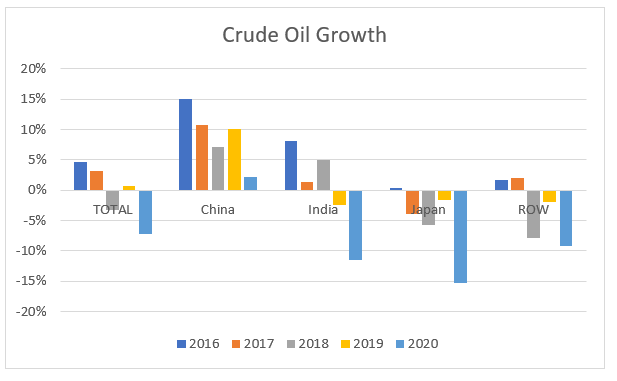 While we expect a post covid bounce back, longer term pressures and the environmental agenda will speed up the transition away from fossil fuels. Environmental issues are at the forefront. Renewable resources and maritime alternative fuels, seem to pick up the reins sooner than it was expected. How much this will diminish crude oil global trade, and to what extent? Time will tell, but what is certain is that the current oil crisis will leave an indelible mark in shipping.

In the years ahead, crude oil is still a major valuable commodity and the market, prices will move up and down, but China will probably still act instinctively against movements to bring equilibrium to the shipping market. However, alternative options are ‘entering the game’ and this should not be ignored. Α new era for the tanker market is beginning to emerge. Who will be favored this time? Probably the one who will adequately understand the changes.