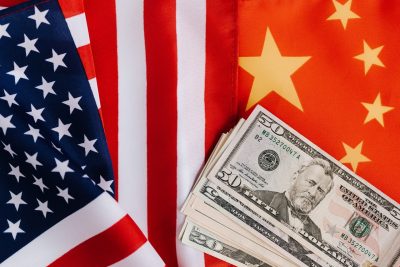 Trump started a trade war with China during his first year as President in 2017. It was and remains a strategy with not only economic losses for the two powerful traders, but also changes the global shipping map. This article will discuss bulker performance during Trump years.

The Impact on Bulker Imports

Here is a summary of the bulker imports under Trump. We added 2016, which was Obama’s last year in office (blue bar). 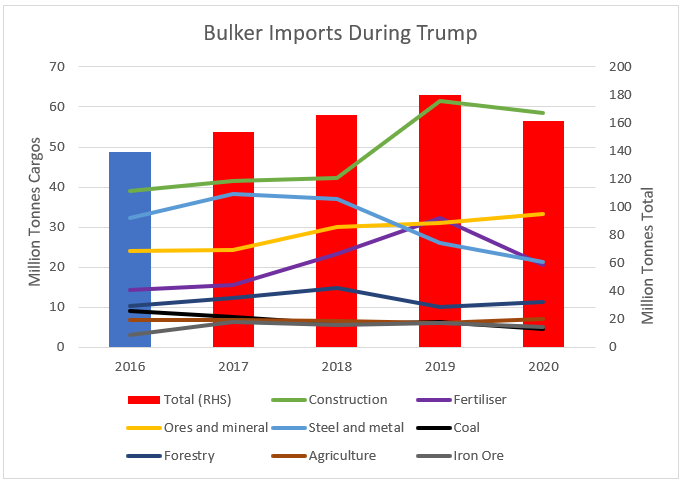 Steel imports had the desired affect falling from 32 to 21 million tonnes by the end of the term. This was offset, however, by increases in construction-based materials. Cement and gypsum have done particular well. Maybe it was needed to build Trump’s wall? Whatever the reason, it’s a quantity increase that cannot be ignored. During 2019, there was an increase of almost 20 million tonnes.

Overall, you can see the reverse intended action happened and imports rose under Trump.  Sadly, Covid affected the data. Τhe pandemic contributed significantly to the reductions in imports in 2020. Fertilisers, for example, took a big hit as biofuel demand dropped creating a surplus of corn.

Up to 2019 bulker imports in the US grew 30% or 10% per year. While there was growth of 9% or 3% per year for bulker performance during Trump years, in particular the first 3. This is incredible considering all the tariffs Trump put in place. His intention was to encourage US traders to move production back home, due to expensive imported cargoes. And in some fields, there were measurable changes, like the steel industry. However, now with all the data we can look at the total impact.

There are other groups of commodities though, that were not impacted as much by the tariffs. Why was this? Many US companies do not have alternative importers. Thus, they were forced to bear the brunt of the tariffs, dampening their profit margins and laying off staff.

The Impact on Exports 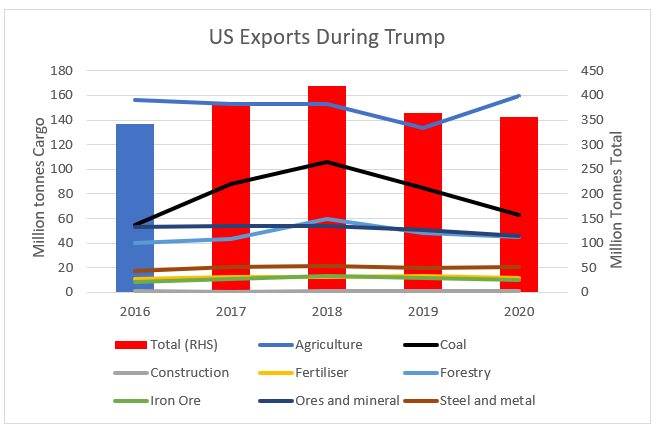 In terms of exports, the picture was fairly flat. Total Exports only really peaked in 2018 due to India’s appetite for coal, otherwise the graph would have been flatter. The main message the above diagram shows is one of underperformance. However, the flat numbers mask the difficulty exporters had finding alternative markets.

Let’s focus on the agriculture exports. The US economy relies heavily on its agricultural field. More specifically US is one of the major soya beans exporters in the world, and China is the main importer which imposed a counter tariff. This significantly damaged an important trade for the US.

Consequently, both these countries are negatively affected from the trade war, which especially for the US led to higher prices for consumers and financial difficulties for farmers. The market faced high pressure due to lower exports of soya beans, again during the most crucial year, 2018.

The raft of protection measures only causes retaliatory policies with the rest of the world. Overall US export growth averaged 1% PA over the 4 years. A dismal performance.

How did this affect shipping?

For us in the shipping industry the episode was a net positive. US imports were higher than the global average and US exports had to travel further to reach their destination, thus increasing the important ‘tonne miles’.

However, if more countries employ such measures in an effort to shorten supply chains, then the gains could be reversed. For certain commodity groups like grains, fertilisers, construction and metals, the investment to keep key resources closer to home maybe a damaging longer-term goal. We seem to be going through a transition period as the world adapts to new challenges. We just hope that this does not result in less trade.

What for the next four years?

Trump, love him or loath him, was a wild card US leader with an alternative agenda and good support. The moral of this story is this protectionism policy didn’t work.  It only damaged the US balance sheet and created pain in other parts of the economy.

Sadly, the protectionism agenda still has support in the new US administration. Biden signed an executive order to review US Trade, tightening the rules for federal government to prefer domestic suppliers rather than foreign ones.

History has shown that in each battle, allies are essential. China has already opened the road impressively by signing in November 2020 the Regional Comprehensive Economic Partnership. A trade agreement between ten countries of ASEAN and five Asia-Pacific countries. It also came into an agreement with the EU in December 2020, through the Comprehensive Agreement on Investment (CAI), after seven years of negotiations. Has Biden the capability to rebuild trade relations?  The speeches would indicate so but let’s hope we see greater co-operation in the future.